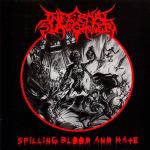 Haste makes waste and Rome was not built in a day, but INFERNAL SLAUGHTER from Chile are leisured to the maximum. The band was founded 1997, during the years 2003 and 2004 two demos got recorded and then, finally, in 2015 the debut album! Having a time of decades in mind it does not carry any weight the review of “Spilling Blood And Hate” took time until the end of 2016. It is an apt title, by the way. From the first to the last second the band is always on the edge of breaking any speed record, the tempo is fast-forward all the time. Whatever I was doing listening to the 10 tracks (plus intro) I was doing faster than normal. And each time my mood tipped over into that kind of rigid resolution that makes you keep on going until all tasks are settled. Damn! Even SLAYER or KREATOR did not manage to create riffs more aggressive, sharply contoured and neck breaking. Thanks to the tight and catchy vocals the songs even got a high level of recognizability, which is not that usual when you are being overrun by such a tornado. Besides HELLLBRINGER my personal Thrash Metal favorite this year. http://pactorecords.blogspot.de