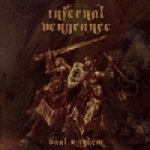 Karl Beckmann’s (ex-MITHOTYN, ex-INDUNGEON) new band is called INFERNAL VENGEANCE. With some hesitation one might still call it Melodic Death/Thrash Metal, especially when thinking of all those bands sounding like MAIDEN with a singer who can’t sing considering themselves as Death Metal. INFERNAL VENGEANCE are not that faceless as all those IN FLAMES clones and to be quite honest, their music is rather hymnic but dirty Heavy Metal with extreme vocals made for beer drinkers and headbangers. To keep this short, "Dual Mayhem" is a well balanced, rather slow album made to be played live. Each song has its own vibes and, consequently, the album doesn’t get boring at all. The only thing that slightly annoys me is the somewhat embarassing intro for ‘By The End Of The Day’: obviously a Viking captain holding a speech just before the attack. They should have recorded that one in Swedish, I think, because the Viking’s English sounds pretty bad (both pronunciation and grammar). Apart from that, this is really good stuff. www.infernalvengeance.com