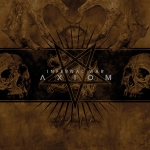 This is the third album of Polish Black Metallers INFERNAL WAR that follows ”Redesekration – The Gospel Of Hatred And Apotheosis Of Genocide” after a period of eight years. This was a very intense album so I advise you to check it out as well (its review somewhere else on these pages might be useful for background information on these guys). Between these two records INFERNAL WAR released an EP ”Conflagrator” (2009), a split ”Transfigurations” (2010) and a compilation ”Chronicles Of Genocide” (2014). ”Axiom” continues where ”Redesekration…” left off with a similar fury with the Thrash and Death influences still present. INFERNAL WAR can be considered as a Black Metal equivalent of BEHEMOTH. The production is just one example but the band similarly knows how to combine extremity with quality very subtle. Drummer Stormblast is an essential element for this statement. Next to his impressive blasting his technical skills in the slower parts are equally intense and energetic. Just listen to ’Transfigure’ or ’Coronation’. Of course, the other members are also responisible for the impact of ”Axiom”. Guitarists Zyklon and Triamphator spit riffs that are good and shredding on their own, but didn’t stand out in catchiness. Godcrusher’s bass did a great job as well and not just followed the axemen. Vocalist Herr Warcrimer reminded a lot of L.G. Petrov on ”Left Hand Path” which turned out to be an excellent combination with the sonic violence. The more this album spinned, the better it became, so I urge you to check this heavyweight if you’re a fan of THUNDERBOLT, BELPHEGOR, MARDUK and the likes as well as DRAWN AND QUARTERED, MAVETH, DEAD CONGREGATION and BEHEMOTH because of its fury. Expect to find this one in polls of 2015. For more info go to www.facebook.com/infernalwarofficial, www.agoniarecords.com