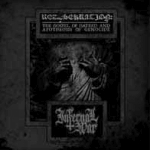 This Polish five piece gained themselves quite a lot of negative attention already because of the fact that they used to come up with a mini album entitled "Infernal SS" as well as songtitles like ‘Jewhammer’, ‘Genocide Command’ or ‘Czarne Legiony SS (Black Legions Of SS)’. Two members of the band (guitarist Triumphator and drummer Stormblast) are also part of THUNDERBOLT, another Polish Black Metal act, that had to deal with similar accusations when they started out. Well, I’m not sure how serious they were in all this nor if they were actually really involved in the NSBM scene… but at least the guys were clever enough (?!) to set the record straight by now by publishing the following statement on their website: "INFERNAL WAR is the audial essence of pure inhuman terror, a soundtrack to genocide. The band stands for the extermination of weak and ignorant human masses, being neither a political band nor a NSBM band. INFERNAL WAR supports wars, genocides, murders and the total death of this beautiful modern world… Hail Satan!" If they really had a NSBM past, this certainly won’t gain them many supporters in that movement any longer. Decide for yourselves! On the musical side of things, their most current full length "Redesekration – Gospel Of Hatred And Apotheosis Of Genocide" is one of the strongest extreme Metal releases I’ve heard in quite some time! Imagine the intensity of "Panzer Division MARDUK", mixed with a SLAYER-esque guitar department ("Hell Awaits" / "Reign In Blood" period), some vintage MORBID ANGEL overtones here and there and the raw into your face attitude of ANGEL CORPSE and you’re already kinda close. On top of that you’ll be hearing a hateful, yet very impressive voice and top notch musicianship (even the bass is often audible)… and all that extremely professional and very powerful produced (while the sound of the snare drum reminds me a bit on "Infernal Overkill" by DESTRUCTION)! I wouldn’t even label these guys "Black Metal" (although they visually go for this genre with all the corpsepaint and stuff) as their songwriting incorporates too many Death and Thrash Metal ingredients. And the icing on the cake is a killer duet between vocalist Warcrimer and ANGEL CORPSE’s Pete Helmkamp on the track ‘Regime Of Terror’! What a blast, absolutely amazing! Unfortunately the printing / layout of the CD booklet / traycard turned out a bit too dark for my taste and the chosen fonts are partly hardly readable. But except for that: a helluva monster of an album! www.agoniarecords.com