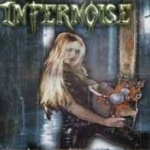 Quite difficult to start the review of this Spanish band which is presenting their official debut with "Chainsaw’s Law". INFERNOISE are musically far away from home and can be located on the other side of the ocean right between the Bay Area Metal camp and their American Heavy Metal brothers. Just imagine a wild bastard of PANTERA and TESTAMENT and taking into account every single song quite enjoyable. The problem is the similarity of the songs and after listening to the complete album a certain feeling of predictability is unavoidable. Maybe this sounds too hard because the band is not playing 40 minutes of totally inspired extreme Metal, especially if you keep in mind that they have traveled to Finland to record "The Chainsaw’s Law" under the best possible conditions (Sonic Pump Studios). It’s a debut and far away at the horizon there is definitely light, but INFERNOISE need at least a further release to fully use their given potential. www.infernoise.com, www.locomotiverecords.com