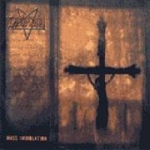 Just like Denmark’s THORIUM these four (to me) previously unknown UK monsters seem to worship the one and only DEICIDE quite immensely. But I couldn’t care less, cause their fourteen track debut “Mass Immolation” is not only a lot more intense than THORIUM’s “Ocean Of Blasphemy”, it’s even far more brutal than the originators of this style. The drum sound is a bit too clinical for my taste (especially the double bass and snare) but INFESTATION mutilate themselves with so much velocity through their material that all of a sudden it doesn’t seem to matter anymore. Tracks like ‘Legions Of Death’, ‘Desecrate’, ‘Butcher Knife’ and ‘Infest’ are not even reaching a playing time of two minutes! Plug in and practice what you preach seems to be their motto. Highly intense, yet incredibly tight executed songwriting, razor sharp guitarwork and a voice straight from the pits of hell. Their lyrical themes are (of course) also dealing with the left hand path, but judging them by some of their songtitles (‘Evil, Evil’, ‘Black Pope’, ‘Book Of Lies’…) are a bit too cliché for my taste, but what the fuck… All in all this is a solid foundation destined not only to gain just a little attention, but also to build a longer lasting career on. After all it’s really cool to see bands like INFESTATION (or also DESECRATION) coming from the UK again.