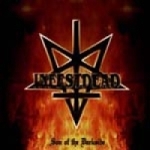 This is a fine gem for all Dan Swanö fans that are collecting more or less everything from him. This nicely packed 7" EP includes two unreleased songs, one from each band, both recorded and offering the perfect Unisound Studio sound. The INFESTDEAD song included here is called ‘Dead Earth’ and was recorded back in autumn 1993 as written on the inlay. This is Death Metal which you usually only can expect from bands from the USA, very rhythm based with great and tight riffs and long guitarsolos. The screams from Dread are cool as well so all I can say that this side of the 7" EP is very good. Everyone who knows their old CDs knows what I’m talking about. The other side is DARKCIDE’s own and in my ears even better than the INFESTDEAD-side, offering us the unreleased song ‘Lord Of Evil’ recorded back in summer 1994. To be honest, I don’t know if DARKCIDE have released something in the past as this band is totally new to me. Dan Swanö is taking care of the (ultradeep) vocals, guitars and bass, Day DiSyraah (PAN-THY-MONIUM fans might scream while reading this name) is playing the guitars and keyboards and a person called Raal Pauga is raping the drums. DARKCIDE can convince with fast brutal Death Metal in the old school vein with great deep vocals and some great keyboards here and there. Really refreshing, awesome!!! This is Ancient Enemy Records’ first release, as far as I know strictly limited to 333 copies and sells for 7 € which I think is quite expensive for an approximately 8 minutes long record, but all of us know that postage sucks everywhere and as this is truly a collector’s item I think no real supporter won’t mind this price. Not to forget that this is an official release in agreement with Dan Swanö. From my point of view a label like Ancient Enemy Records should be supported in any positive way as this is surely a non-profit release and each single cent John is earning with this one will be spend on his upcoming releases and the names of the releases sound amazing: PHANTASMAGORIA, DEVOURMENT (SWE, not the American ones) and, hell yes, MASTICATION!!! Support this label and get in touch with John (john_aer@hotmail.com) and check out www.myspace.com/ancient_enemy_records for ordering infos and further details.