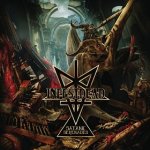 Leave it up to Century Media to bring up another excellent anthology in the form of INFESTDEAD’s "Satanic Serenades". I like the fact that Century Media is giving this Death Metal veteran act the honors of a reissue. This double disc set has all recordings completely remastered by Dan Swanö (yes, that Dan Swanö) and the CD booklet features all lyrics and liner-notes by Dan. In the set you get the following; "Demo 1993", "Killing Christ" EP, "Hellfuck" album, and "Jesusatan" album. The only 2 releases missing from this package are the "Fall From Grace" 5-way split with MURDER CORPORATION, DELLAMORTE, PANZERCHRIST and TUMORHEAD or the split with DARKCIDE, but oh well you still get a ton of bang for your money (don’t worry folks, the INFESTDEAD songs of both split releases are on this compilation: ‘Bewitch The Virgin’ is part of the "Hellfuck" album and ‘Dead Earth’ is one of the two demo tracks – Frank). If you haven’t heard of INFESTDEAD and you like early to mid 90s era Death Metal then you should really give them a try. They are one of those bands that had a solid sound but due to one reason or another they just didn’t get their just due. Disc 1 features the above mentioned "Jesusatan" and "Demo 1993" releases and includes a DEEP PURPLE cover song. The first thing you will like about this reissue is the sound, very crisp and clear production. The guitars, drums, and vocals all really stand out and have that extra "kick" in the sound to make it stand out more. The bass sound is really good too but not enough to drown out the guitars or drums. Disc 2 contains the "Hellfuck" and "Killing Christ" releases, again a solid job on remastering the music and giving it new life. Musically, they have some catchy riffs and excellent guitar solos (almost remind me a bit of early DEICIDE solos). In a nutshell you get 95% of the band’s entire catalog in a 2-disc version and I honestly think it makes a good addition to the collection. That’s 41 songs that track in just under 89 minutes! Maybe it’s my OCD-ness but the one thing that I find wrong with this release is that the albums were not placed in chronological order. It would be nice to see the band’s progression evenly in chronological order, but hey I can’t complain as at least they reissued the material. Since most of the back catalog was hard to find or is expensive, I highly recommend to get this anthology before it’s too late. For more info check out: www.centurymedia.com