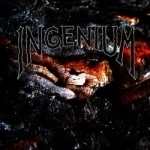 They seem to have come from out of nowhere, yet here they are: INGENIUM, a trio from Trondheim, Norway. Trying to find out more, I only detected that these guys are around as a band since 2009, but without any notable history. None of these guys played in any other band and no stuff has been released to date. And now there is this first sign of life after four years of existence. And it’s an impressing one, even though INGENIUM can’t deny to have heard some OPETH albums (especially the older ones). The opening double of ‘I Seek Nothing, Yet I Life’ and ‘Seeing It All’ speaks too much of the truth here. But it would be too easy to label them a clone band. We can find many other influences from all over the Metal scene in the progression of this album. Just listen to the strange, somehow jazzy Thrash Metal break in ‘Feather Flesh Appearance’, a really strange song by the way, one of the weirdest tracks I heard in the last months. The next one, ‘The Birth Of Neuron’ is even stranger, a somehow disharmonic and noisy, yet laid back short interlude. Some moments on "Ingenium" even remind of (Neo-)Prog Rock, like in the beginning of ‘All Deception’, that turns out to become a quite bizarre song, too. More than nine minutes with strange influences from OPETH to Funk Metal and back with (dis)harmonic breaks and modern Metal riffing form a very challenging opus full of surprises that surely demands too much of the average Death Metal maniac. But all those into really Progressive Metal will be shouting out with glee. After the short instrumental interlude ‘Reed’, INGENIUM pull out all the stops on the concluding ‘Grinding The Trees’, another roller coaster ride through the myriads of Metal. Okay, sometimes INGENIUM lose the thread, sometimes the breaks sound forced somehow. But remember: this is a debut album from a young band, not the fifth album some very experienced band recorded! So I think for the next album, there are two options of what we can expect from INGENIUM: either they release a Progressive Death Metal masterpiece or they record stuff that overcharges the nerves of even experienced Prog Metal listeners. I hope for the first option and stay tuned. But for now, Prog Death lunatics have to make do with this album. If you want something to think about, go to: www.facebook.com/ingeniumnorway