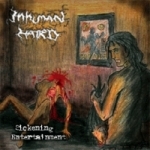 Belgian band INHUMAN HATRED offer their first demo on CD (they call it CDemo, a word that seems to be quite familiar in the Benelux I suppose), after founding the band back in 1998. A couple of line-up changes made continuous work quite hard, so this is, after a couple of gigs, their first release. The band defines themselves as brutal Death Metal, which I think is so far correct, probably with a few mid-90s influences, especially from the other side of the Atlantic. All six songs on this MCD are very very rhythmical, sometimes a bit hectical, varying between midtempo and highspeed, which only partially works – where I think that a song like ‘Infected By The Exhumed’ is quite good, a song like the title-song or the hectic ‘Immolation In Repulse And Desecration’ bore the hell out of me and make me aware why I never appreciated that stuff back in the 90s very much. It is now a matter of viewing it: for a first demo, I think this is really okayish, sound is decent as well, while if I bear in mind that the band is already existing for five years, I think that there could have been much more. And another fact is that it is not like there are no other bands playing this kind of Death Metal. A bit of originality (if their aim is to stand out – I know that there are bands who simply want to play the music they like) wouldn’t hurt here. You can get an impression of the band by downloading mp3-files from their homepage, and that might probably be the best choice for persons into mid-90s US-American Death Metal to check this out. For me, this is at the moment, still too average and I doubt that I will listen to this very often again. inhumanhatred.deathmetal.be