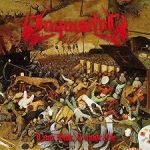 INQUISITOR
I Am Sick, I Must Die
(Hammerheart Records)
8:21min

INQUISITOR, one of my fave bands ever is back! Alex B, Wim, Erik and Alex W, the original line-up that recorded the ultra underrated "Walpurgis – Sabbath Of Lust", which is also one of my fave albums ever! Yeah, I am a groupie, so what? When I heard that the band had reunited and that they were working on a new album I was really anxious to listen to new stuff. And here it is. Yes, 8 minutes running time is not enough, but well, this is just an advance track ‘I Am Sick, I Must Die’ paired with two cover versions: ‘Extreme Unction’ from PESTILENCE and ‘Perish In Flames’ from DARK ANGEL. By the way, I think those two covers are great choices. And INQUISITOR did a great job. Now, the new track is top notch INQUISITOR material. It seems that the band never stopped playing, because they sound exactly as in their last album, that came out 21 years ago! Frantic, fast paced, brutal Thrash Metal. I absolutely dig Alex W’s vocals. He sounds desperate, maniacal and just plain insane! Wim’s drum performance is fast, yet clinical and varied. Add Erik’s and Alex’s razor sharp riffing and pounding bass and you got some of the best brutal Thrash Metal ever played in the history of mankind! If you have heard INQUISITOR before, go ahead and blindly get it. if you haven’t heard about the band (shame on you), you might as well get this, because it is amazing stuff! Conclusion: I am sick and I must have this. So far this is a digital only release, but I hope Hammerheart will put this out as a 7", because I need it. And by the way, INQUISITOR’s new album, entitled “Stigmata Me, I’m In Misery” will be released in January 2018, also on Hammerheart. So be prepared, you have been warned! Go show the band your support here: www.facebook.com/Inquisitorxtremethrash and contact their label here: www.hammerheart.com