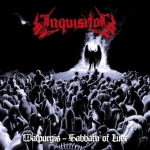 The mighty INQUISITOR were / are one of those bands that made a big impact in the early 90s as they appeared on the Metal map at the right time when very successful acts such as MERCILESS were still putting out records, and Thrash Metal fans were moving more and more to the Death Metal side. However INQUISITOR also followed the steps of other bands of the decade and genre by only releasing a couple of demos and one full length album before splitting up in 1997. Truth is Death / Thrash was a genre loved by some people and hated by others, and worst thing of all is that both genres went down spiral for fans as Black Metal and other genres picked up. So almost 20 years have passed since the release of their one and only debut album “Walpurgis – Sabbath Of Lust” which included some great tunes, and even more years after the release of the band’s demos. So the now also re-animated Hammerheart Records people thought it would be a good idea to re-release INQUISITOR’s whole discography in one package, and here it is. This bundle includes 2 CDs, the first one includes the debut album and the second one includes the demos, so you get everything here. Now about the sound of the band, for those unfamiliar with the early Death / Thrash scene, “Walpurgis – Sabbath Of Lust” sounds like what SADUS, NUM SKULL or CANCER might put out in one of their sophomore albums, fast and devastating drumming, riffing and bass, the vocals are basically your average Thrash voice with some rage on top of it all the time. Production wise obviously the demos sound more straight forward and unpolished than the album; both give a very pleasant ride of headbanging non-stop nights. If you never had enough of your teenager SLAYER doze or if you are a young Metalhead wanting to pay tribute to the old masters of the genre, go pay a visit to www.facebook.com/inquisitorxtremethrash or www.hammerheart.com and buy the damn thing. BTW, did you know that ANCIENT RITES guitarist Erik Sprooten played guitar in this band? Who would imagine.

Related reviews / interviews:
• INQUISITOR - I Am Sick, I Must Die (Alfonso Perez)
Back Report errors Print