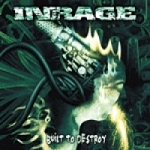 Does anyone still remember LOST SOULS from Sweden? These guys released two albums a couple of years ago, one on Roadrunner and another on Nuclear Blast before they decided to call it quits in 2000. Well, I definitely never checked them out, but the label’s info sheet reveals that all of the INRAGE members used to be in LOST SOULS, they only changed their name and started from zero again. Their new album (or debut if you prefer) kicks off very promising – very well produced (courtesy of the rather famous Underground Studio) and extremely skilled performed, aggressive Thrash Metal with hints of the 80s, but an Anselmo type vocalist. Unfortunately the band doesn’t manage to continue on with this quite interesting mixture and pretty quickly switches over to NU Metal completely, which is totally annoying and really turned me off immediately. So, whenever I’m in the mood for “Built To Destroy” now, I certainly put on Michael Schenker’s record of the same name (yeah, I’m a wimp, so what?!) instead of this pseudo aggressive bullshit.