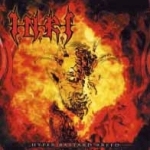 Even though the band’s name immediately brings one of the classic SARCOFAGO albums to mind, these five Dutch Death Metal maniacs are not necessarily following the musical path of Wagner Antichrist and his unholy cohorts. INRI, who originally started out as STIGMATHEIST in 1994 (their one and only album “It All Ends Today” came out in 1998 on Voices Of Wonder), are a lot more infected by the more current happenings within the underground, mentioning bands such as THE CROWN, GOD DETHRONED and MALEVOLENT CREATION as some of their major influences. And indeed – they really managed to deliver a quite cool coctail out of that on their own: there’s the thrashy elements of THE CROWN, the Death Metal brutality of GOD DETHRONED and the blasting intensity of MALEVOLENT CREATION. INRI’s songwriting, which sounds very matured already, is very straight ahead, to the point, heavy and always extremely powerful. And when it comes to the playing time of the songs, twelve out of fifteen tracks are not even reaching the three minutes mark! While other bands often tend to write way too long material, with too many boring, unnecessary or repetitive parts, INRI simply succeeded in reducing their tunes to the max, which is great! The excellent production (courtesy of Franky’s Recording Kitchen) compliments the songs even more and turns the album into a quite refreshing debut offering. INRI may not offer anything new or innovative, but who gives a fuck, if the music turns out to be a lot of fun in the end, nevertheless?