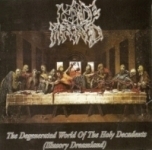 INSIDE HATRED
The Degenerated World Of The Holy Decadents (Illusory Dreamland)
(self-financed)
23:25min

Together with the already reviewed new demo of ESCARNIUM I got the INSIDE HATRED demo CD with the long title "The Degenerated World Of The Holy Decadents (Illusory Dreamland)". First awesome aspect was the outstanding cover showing the last supper in a "different" version. Musically speaking those Brazilians show us Death Metal in its raw and unpolished form, easiest to describe with the likes of INCANTATION. Actually it’s well performed with a raw but good sound and the songs featured here are good, though not outstanding if you ask me. The main problem is the variation, which is little too less offered. In my eyes they are doing best when performing not only in high-speed but also slow parts, as shown in the cool ‘Religious (Ungraceful Humanity)’. The other songs suffer too much on the one dimensional direction, which is perhaps caused by the drums which are too simple. The quality of the CD is good though, no doubt here and listening to this CD make fun a lot; nevertheless it’s clear that INSIDE HATRED are at their beginnings. Instead of praising this demo too much (which would be easy, as it surely has its qualities) I prefer to wait for their next output – this band got potential. Recognizable! And the simple fact that this demo is from the year 2007 makes me feel that a new output from them won’t take too long, but who knows in this crazy little world what’s going on in a small rehearsal room in Vitória da Conquista, Bahia – Brazil? I think INSIDE HATRED is a band to keep an eye on and I hope the time to wait for their next effort won’t take too long. Still I can say that each fan of INCANTATION should dare to listen to some of the songs from this demo on their myspace page to get a picture and an own idea of this band. Listen to the songs and contact them through www.myspace.com/insidehatredmorbiddeath or by email at rafaelhatred@gmail.com.