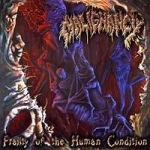 What happen when you take two brutal bands and put them together onto one CD? And if one of the bands features members from MORTICIAN? Holy shit, that’s exactly what we have here! This CD features two of the most brutal bands in today’s Death Metal scene. But, as always, lets start with the first band: MALIGNANCY. As you may know, it’s Roger Beaujard from MORTICIAN playing drums here. They have various releases out (2 CD’s and a mini CD) and this time they have recorded 5 songs in the typical vein of this band, pure brutal Death Metal the American way, you know? Fast and furious drums, distorted guitars and a vocalist that sings with its lungs. Brutal shit, for sure! Their side of this CD is called "Fragility Of The Human Condition". On the other side, we have this young, promising and very talented band called INTERVALLE BIZZARE, their part is entitled "Unexpected Awakening Of Massive Mass" and features another 5 tracks (one of them, being a cover version from BRUTAL TRUTH’s ‘Walking Corpse’) of good, brutal, technical Death Metal with slight elements taken from Grind, but those are the less. Good production in both cases and a very recommendable release for every fan of brutal Death Metal.