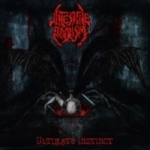 The infamous and vicious Japanese hordes from Hell, INTESTINE BAALISM are on loose again, for the 3rd time I could even add as far as their album recording history is concerned anyway. I have always thought that INTENSE BAALISM is a pretty unique Death Metal act for not grinding down and crossing the most fragile barricades on their way to the world domination. They actually have lots of more things going on in their realm of chaos and confusion than one could expect from them first. On the band’s 3rd album, “Ultimate Instinct”, they still trust heavily their old school Death Metal approach, added with some early Gothenburg-ish melo-Death Metal elements and even some sharp nails from a grim Black Metal’s world that work out as tasty spices for the true benefit of them on their latest opus. It’s a quite pleasent mixture of all these tiny elements that make INTESTINE BAALISM’s 3rd album such as well-done wholeness for even urging me to revisit on it more often than just occasionally only. INTESTINE BAALISM really have a very good blend of things put in action on “Ultimate Instinct”, which is actually that path that rotten they have followed all the time since their debut album, “An Anatomy Of The Beast”, was kicked to this rotten world. Seiji Kakuzaki, who’s behind the vocal duties behind the band, has two different types of vocal approaches; The type of deep, guttural death grunts that are kinda similar to both Craig Pillard’s and John McEntee’s (in INCANTATION) and Ross Dolan’s (IMMOLATION) – and then on the other hand, this shrieky type of Black Metal approach for his vocalism that overall add a really nice contrast to their stuff. Otherwise when INTESTINE BAALISM have a true capabilty to wrap up some nice musical ideas into one big, heads-turning wholeness by mixing different things within (extreme) Metal, what can you do but admire them for their achievements in the race to become the kings of the Death Metal hill. “Ultimate Instinct” is a pure and dry dynamite – be careful when handling it. www.myspace.com/intestinebaalism