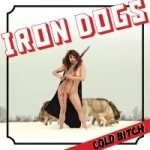 It seems this label Dying Victims is fond on old school Speed Metal (not Thrash if I am too bit picky) and it seems to be like a good idea. The essence that I can sense is that of bands that recall early ANVIL, EXCITER, JUDAS PRIEST and IRON MAIDEN. Yes, when Speed Metal was not exactly a term used that much, yet you know the bands were not your usual Heavy Metal. IRON DOGS is a band that recalls all those bands, probably sounding a bit more Rock’n’Roll at times thus also MOTÖRHEAD can be used as a reference. At times it seems like if the vocalist could do a better job, but it also adds that charm of “we wanna Metal, we don’t care what you say or how we do” that one just needs to make a devil horn sign with a hand and headbang as hard as it can. Formed just in 2011, this Canadian band proves that digging the sound of old early Speed Metal bands and obscure Heavy Metal still proves to be an exciting form of Metal. Even the production has a quite vibrant and old school sound, which makes this a perfect choice. At times this band reminds me of one of my favorite bands, SLOUGH FEG, thus by the same mark of iron and steel, reminds a bit in some epic parts to the underrated yet great MANILLA ROAD, which can be faced in the great ‘Dragon Chord’. This sounds as it could be released back in 1985 and still possesses a fresh air, with many great songs. Fans of good old Heavy Metal with many touches of Speed Metal, look no further for the bite of the IRON DOGS. http://soundcloud.com/irondogs, www.dying-victims.de