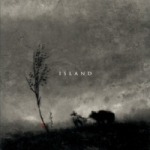 Ah, finally a new sign of life from one of Germanys most outstanding bands – at least in my humble opinion! In case you never heard that name I suggest that you also read the review of their output “Orakel” to be found here on the Voices pages. ISLAND still stands true to their own, atmospheric genre-defying brand of music. Three tracks are included on this mini CD as well as a calm brooding intro of slightly dreamy ambient quality which reminded me a little bit on the the long bonus track on ANATHEMA’s “Serenades” (in terms of mood). After that the band proceeds with the known intricate riffing into the song ‘The White Ghoul’ that begins calm yet rhythmic crowned by clear dual vocals that add an almost eerie atmosphere to the whole song and lyrics. The song keeps evolving until the percussive structure turns into a blastbeat and harsh, croaked vocals set in, ending shortly afterwards. ‘Veritas’, the second song, shows a bit more of the uptempo trademarks as present on “Orakel” with lots of double bass before turning into a a more epic vein that reminded me slightly of IN THE WOODS and then ending in a dynamic massive way again. The title track on the other hand is a melancholic midtempo piece incorporating some very moody accoustic parts. In contrast to “Orakel”, the clear dual vocals prevail on this MCD and as rough comparison I think it is justified to mention OPETH even though ISLAND clearly do not borrow from them! One could say that “Island” is the other side of “Orakel” insofar as the band mentioned that the songs after their debut would go into a more rockish and atmospheric direction (ok, I cannot find anything that resembles Rock but what the heck… instead it’s more progressive).This band incorporates stellar musicianship without showing off, a great feeling for songwriting, structures, introspective lyrics and a clear sense of aesthetics. Concerning the production ISLAND chose a very direct and natural sound (recorded by Armin Rave / PAVOR) that is sometimes intensified by very subtle synthesizer lines. I strongly urge you to check out www.islandband.de where you can actually download ‘The White Ghoul’ and order this great piece of music for 5 Euro in Germany / 7 Euro worldwide. Also be sure to check the other bands the musicians of ISLAND are involved in, namely KLABAUTAMANN, ORBO, CENTAURUS A, VALBORG and GUERILLA. Enough said – go for it!!!