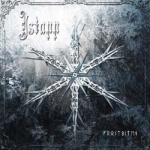 I was happy to read via their Facebook page, that Swedens melodic Black Metal horde ISTAPP are active again under their main moniker and would release some new material soon as it seemed for a while, that ISTAPP is on hold and Isar and Fjalar are only active in NIVLHEL nowadays. So what has changed since their debut release "Blekinge"? They slightly have developed their style into a more melodic direction, without losing their grim basis. Still the style is melodic Black Metal with partly freezing melodies and still, there is the shadow of the 90s and mighty DISSECTION can be heared as a source of inspiration here and there. But only as that, as they never go and simply copy anything. The opening track ‘Apep’ is melodic Black Metal at its best and I would go that far to say, that ISTAPP is one of the ten best bands on the planet, still playing this style. Freezing lead melodies surrounded by fine cold lead guitars with fast drumming and ever pounding double-bass, complemented with the fine, carefully used caws of vocalist Isar. ‘Frostbiten’ goes a bit more into the Viking Metal direction, with male choire styled vocals added to the normal caws and after two or three spins, I really started to enjoy these vocals a lot. Also the classic Heavy Metal guitar in this track is really outstanding and recommended to listen to. Next hightlight is the third track ‘Kall (Elsen)’ which is far more melodic and could easily have fitted on "The Jester Race" back in 1996. ‘Skoll’ is also starting with some real Heavy Metal tunes and is also a really enjoyable track. Compared to their debut, they reduced the grimness a bit but the use of more melodic tunes and classic Heavy Metal guitars makes this second output a really enjoyable trip back into the mid 90s. The remaining tracks are a bit colder again and go back into the direction of their debut, but also there, some Viking tunes are appearing here and there (‘Fimbulvinter’). All in all "Frostbiten" is a really strong second album, which will be released via Trollzorn Records this time, as the guys left Metal Blade after their debut. Fans of this style can buy this record without even listening to it in advance and fans of the band will buy this anyway. Recommended output and hopefully, it will not take another five years to hear some new tunes from them. Check them out via: www.facebook.com/pages/istapp-official/125581444205995, www.trollzorn.de