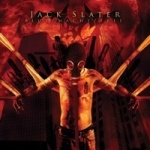 This record comes like a brainstorm(ing) out of my speakers: sick, twisted, varied, fast, sometimes groovy, twisted soli, strange, brutal, heavy, technical, deeep vocals. This is my first encounter with this German sickos and not a bad one! But in advance I have to say this is not really my cup of tea, and I don’t even drink tea. But I have to admit that JACK SLATER come up with a very fresh version of brutal technical Death Metal. You simply hear that they put a lot of love and humor into their music with all its details and complexities. Yet this is no fun band. I think the only band you could compare them to is CEPHALIC CARNAGE for you just have to be a bit strange to write such music. On the other hand everyone into technical Death Metal should easily get into their music, the weirdness does not control the sound but adds something special to their music – DYING FETUS on a strange trip or something. Yes, it s hard to describe JACK SLATER’s music and any comparison is doomed to fail after the next strange part but you will find a lot of strong parts to bang your head to! But bring a bit humor! As far as I know "Jack Slater" is the name Arnold Schwarzenegger had in his action-comedy "Last Action Hero" (yep… – Frank). And somebody who choses such a name for his band (if it is true) won’t sing about dismembering women while having sex with them or other disgusting shit. The lyrics are (judged by the titles) completly in German, although singing-wise it does not really make a difference – but they seem to share the sick humor the name reflects and the music reeks of as well. So if you want something to happen on your record than go for JACK SLATER’s third album and pay respect to over 10 years in Germany’s underground! Good technical abilities and a heavy production will thank you! This is another sick high-tech band on War Anthem Records that could easily have been released on America’s most varifed Metal label Relapse. Not bad! www.jack-slater.de, www.war-anthem.de