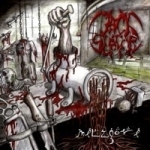 Insanity reigns on JACK SLATER’s second album! Stark raving, hypertechnical but brutal Death Metal with maniacal vocals reciting totally lunatic German lyrics. All 9 songs combine blastbeats and groove parts with absolutely top-notch guitar work and should please every Death Metal fan. Even if you don’t understand German (which is a pity in this case because you miss the hilarious black humour of the lyrics and the song intros) the outstanding technical performance will blow you away. JACK SLATER are high-quality madness for your tortured ears and since I can’t find any shortcomings in their sound, I can recommend this album without hesitation. I was told by quite a few people that JACK SLATER manage to be even more intense on stage, so I’m really looking forward to seeing them performing live on the Krakfest in Mülheim an der Ruhr, Germany on April 23 / 24, 2004. Furthermore, JACK SLATER will be on tour with DIVINE EMPIRE, INCANTATION and MASTER in May and June 2004. Check out www.jack-slater.de for mp3-files, exact tourdates and nice pictures of their spare-time activities.