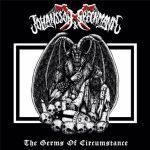 I guess that naming a band after one of the band members is not a strange thing in Rock…VAN HALEN (R.I.P. master Eddie) DOKKEN, OZZY, DIO… but in extreme Metal it is not something you see that often. Well, Swedish Death Metal maestro Rogga Johansson has already a band with his name and Death Metal legend Paul Speckmann has already a band called SPECKMANN PROJECT… oh well, this (as you should imagine) is the unholy collaboration of two Death Metal legends and it’s their fifth album. Rogga does the riffs, Paul the vocals and some friends do the other stuff. In less than half an hour, you get 8 songs of very direct Death Metal with a good dose of Swedish Metal guitar sound, but with a big nod to more American Death Metal. At times this sounds like early MALEVOLENT CREATION with an obvious MASTER / DEATH STRIKE touch. The riffs are simple and direct, and in this case it works for the band. There is an obvious punkish attitude and approach that only two old death heads can conjure. Was I expecting more from this? I think I do, but then again it’s not bad, it is just that I cannot really find any memorable song or riff, or something that makes me check their previous works. There is quality, no doubt, in that, but it all sounds like you have heard it somewhere else, and I dare to say, that even better. If you know the names, you know the bands, then you know you will get what you deserve. But do not expect much more than just a good album of well played and executed Death / Thrash Metal with some legends on it, yet most people will expect a bit more. All further info you will find at www.facebook.com/johansson-speckmann-225899484206206 or www.facebook.com/soulsellerrecords