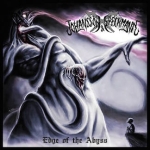 Third full-length album for the side-project created by Rogga Johansson (PAGANIZER, RIBSPREADER, REVOLTING, PUTREVORE, MEGASCAVENGER, THE GROTESQUERY, DOWN AMONG THE DEAD MEN, etc.) and Paul Speckmann (MASTER, DEATH STRIKE, CADAVERIC POISON) in 2013. You might just be familiar with the previous two albums (or check the related reviews below), in this case I let you know that with "Edge Of The Abyss", nothing has changed in their sound, especially compared to "Mask Of The Treacherous". It’s obviously Death Metal in the simplest and rawest form. Johansson’s riffing is minimal and punkish, perfect for the very recognizable Speckmann’s voice, the same since the 80s. After all, it’s music done by expert musicians who know how to write Death Metal songs the way it has to be, without any trace of experimental bullshit. The album lasts just more than thirty-four minutes, a positive aspect because it avoids to be a long-winded listening. Titles like ‘Perpetuate The Lie’, ‘The Last Witness Is Barely Alive’ or ‘The One They All Despised’ imply that the lyrical themes are very similar to those one by MASTER, so it’s the usual Paul’s angry point of view on the nowadays corrupted society. Apart from the two main minds of this project, I would like to praise the good work of Brynjar Helgetun on drums, especially for the use of the double bass drum. He is often Johansson’s faithful drummer on most of his bands, so it’s obvious that they well know their own styles and the chemistry between them is just perfect. I would prefer a more natural sound with less compression but it works anyway. To conclude this review, I am under the impression that "Edge Of The Abyss" is not a new important chapter for the history of Death Metal, but it’s solid enough to please those who are never tired of this kind of stuff or die hard fans of the related bands by Johansson & Speckmann. All additional information at: www.facebook.com/pages/johansson-speckmann/225899484206206, www.soulsellerrecords.com