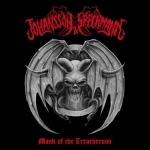 I think it’ll be dumb on my side to even mention who these 2 guys are, but I’ll do it for the sake of the people that might not know it (or have been living under a rock for the last 20 years). Paul Speckmann is the mastermind of such important bands for the early Death Metal era as DEATH STRIKE and the mighty MASTER, on the other hand we have Rogga Johansson, a Swedish guy that has been putting out projects and records every month / year like no one in the whole universe. His most representative bands could be PAGANIZER, REVOLTING and THE GROTESQUERY. So it was just a matter of time when these 2 minds would talk about putting a band together, so it happened back in 2013, that’s when JOHANSSON & SPECKMANN started, with an amazing old school and basic Death Metal debut “Sulphur Skies”. 2 years passed since their mighty debut and now they are back with their sophomore album “Mask Of The Treacherous”. And let me tell you, this is not for the newbies. So basically this time around Paul and Rogga wanted to do the same thing they did with their first album but with an even more simple approach to songwriting, ending up sounding like Groove Death Metal (think GRAVE and UNLEASHED mid era), so you know where this is going. The drums sound great, recorded by Brynjar Helgetun who has spent time (years) working with Rogga in 40% of his projects, so they know each other pretty well. The guitar sound is a bit less muddy, this time the treble-mid attack is on top of everything, with slight solo sections here and there and the bass guitar is pure rhythm section low vibe. Nothing stellar, just the basic concepts of what old school Death Metal should sound. Now, the vocals are what make you feel that you are listening to a mid 90s MASTER album. I mean, Paul is singing the same way he has done it for the last 3 decades. Same topics as MASTER usually cover, like social, nihilistic visions of the world today. So bottom line if you are a fan / follower of Rogga Johansson and / or Paul Speckmann give this album a try. They are not trying to reinvent anything with this album, just trying to put out a record for the die hard old school Death Metal mongers. Modern Metal guys keep yourself away from this record, people wanting more and more 80s – 90s Death Metal (even when the genre is over saturated these days), you will find a hit of non-fresh air with this album, which is exactly what you are looking for, right? If not, why the hell are you looking at a band with these 2 guys working together? You can watch, buy and listen to the record here: www.facebook.com/pages/johansson-speckmann/225899484206206, www.vicrecords.com