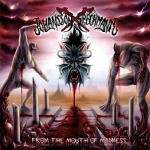 JOHANSSON & SPECKMANN
From The Mouth Of Madness
(Soulseller Records)
31:34min

Two of the most active members of our scene return with their already fourth output of their collaboration entitled "From The Mouth Of Madness". To be honest, I am quite critical when it comes to releases of Rogga Johansson, as he clearly is the strongest force in the European Death Metal scene nowadays and nearly all of his releases are minimum average or even above but due to the mass of his projects, they sometimes lack of highlights, unique ideas and memorable songs. But "From The Mouth Of Madness" starts very solid with ‘The Demon Night’, a groovy old school Death Metal track, sounding like a quicker version of OBITUARY during their "Back From The Dead" era enriched by the cool voice of Paul Speckmann and some really solid Heavy Metal tunes, so very enjoyable and a good song to bang your head to. ‘Is This Just Virtual’ continues very solid and groovy, a fine uptempo track with some slower melodic Death Metal riffs, so for me this is the best track, the project delivered so far. ‘Remove The Creep’ and ‘Condemned’ follow the same direction but again some warm melodies show up in the back occasionally and those melodies bring back some good memories of DESULTORY or even CONVULSE during their "Reflections" era before turning into thrashy Death Metal again. Even some Death’n’Roll found its way into their collaboration in form of ‘Heal The Strain’ and Paul’s voice gives this groovy song a really harsh note while Rogga really wrote some killer riffs and these warm lead melodies, which I wouldn’t call Gothic / Death Metal but the songs definitely have this certain warm touch. With a good production, the really fine drumwork, Paul’s voice and some well-dozed uptempo parts, "From The Mouth Of Madness" is a quite nice and diverting album, which definitely is the best work of the project so far and the best work, the involved guys delivered in the last couple of months. Fans of both can purchase this output blind, the others should at least check this one out. More info can be found here: www.facebook.com/johansson-speckmann-225899484206206, www.soulsellerrecords.com