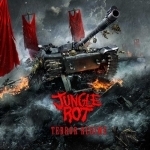 If you already appreciated the evolution JUNGLE ROT showed on their 2011 effort "Kill On Command” then you’ll truely don’t have to hesitate in giving this 7th album a warm embraced moshing welcome. “Terror Regime” comes up even more with shitloads of Thrash influences and vocalwise founding member David Matrise continues the way of getting more and more away from the classical Death Metal growling style. Just take a listen to the enclosed cover of D.R.I.’s ‘I Don’t Need Society’ and feel the difference. If you compare “Terror Regime” to their classical first releases you’ll notice that nowadays he sounds more like an extreme Thrash / Hardcore vocalist instead of the typical Death Metal frontpig, but it works with the music as it already did on “Kill On Command”. If you might have a problem with it then better stick your guns to the old stuff in the discography of JUNGLE ROT. Well, what shall I say, again this new album is of pure headbanging energy. JUNGLE ROT really deliver a damned cool drive, catchy as hell and not drowned in overdosed technical bullshit. The production is heavy in a modern way, but not commercially polished to death. I sometimes wonder why they never made it bigger so far, because their material is easy going for a wider sort of audience and it’s simply made to be performed live in front of a hell of a moshpit. Of course JUNGLE ROT are not the most original thing in the world under all kind of aspects, but their music has more heart and energy then the stuff for example delivered on recent releases by bands like SIX FEET UNDER or OBITUARY. Wanna headbang? Then worship the “Terror Regime”. For more information on JUNGLE ROT check out www.jungle-rot.com, www.facebook.com/igotjunglerot, www.victoryrecords.com