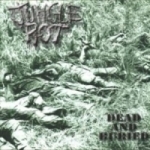 JUNGLE ROT are back to follow up their last album, “Slaughter The Weak”. With that album the band proved to be old school traditional Death Metal, not much has changed since. 13 tracks of old school, SODOM, CELTIC FROST, slower CANNIBAL CORPSE, SIX FEET UNDER influenced Death Metal are here for our audible pleasure. Vocalist Dave Matrise bears an uncanny resemblance to Chris Barnes but with more variance. For the most part the music is slow and very heavy. What sets this band apart from the rest is the fact that they use traditional Death Metal song structures. While bands like CRYPTOPSY and NILE are reinventing Death Metal as we know it, JUNGLE ROT are here to satiate the needs of the old school fans. If you are a fan of well played slow and Heavy Metal then this is for you.