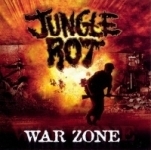 I was quite impressed by the show these guys put on stage some time ago (I think it was a tour with INCANTATION, FUNERUS and CATASTROPHIC – multiple orgasms, I’m tellin’ ya!). As I was pretty broke that time I didn’t buy any of their merch (after plundering the FUNERUS booth, that is). For some reason I never bought any of their stuff afterwards, either. So "War Zone" is my first JUNGLE ROT album. Definitely a mistake. Don’t look for innovation but for exactly what old school maniacs love: SONGS and a neck breaking groove that doesn’t bore you after a short while – at least not me. Not like SIX FEET UNDER – at all. There is simply a lot more variation in the songwriting and in the singing as well. Either this CD is a lot better than "Fueled By Hate" or Mr Stöver is slightly more critical than me: "War Zone" not only makes me wanna move (and if you know my opinion about movement and sports in general that’ll surprise you) – it split my skull, bloodily penetrated the brain and got stuck right there. Welcome to the jungle! One more thing: check out these guys live – for at least in Emden, Germany, they were a blast! And take along enough money for merchandise, hargh! More info at: www.junglerot.net, Label contact: www.crashmusicinc.com.