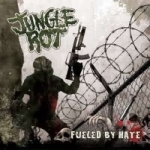 Even though their name was already familiar to me for quite some time now I never really felt the urge to check out any releases by Chicago’s JUNGLE ROT so far… for no particular reason. But thanx to the guys at Remission Records this situation has changed now, as they kindly sent over a free copy of the band’s newest album “Fueled By Hate” for review. So, what can I say? If the band remained faithful to their style over the years (which I suppose), this new record is a good prove, that I personally didn’t really miss out on anything yet… It’s not that the eleven tracks on “Fueled By Hate” are bad in any way (they actually offer a very solid playing and overall good production), it’s just that their style tends to bore me quite a bit. JUNGLE ROT deliver a very basic, mainly midpaced and often very groovy form of Death Metal, somewhere in between MASTER (for the simplicity), OBITUARY and SIX FEET UNDER (for the groovy elements). Always nice to listen to, but considering the amount of weekly releases, not really something that I would spend my money on! There’s already so many bands offering something similar and in direct comparison (judging them just by this record here, of course) JUNGLE ROT are simply still lacking in real stand-out tracks, I’m afraid. But hey, if you should belong to those type of old school maniacs that totally dislike the new breed of ultra brutal, technical, highspeed Death Metal, make sure to give this record a listen. It’s traditional to the bone! More info at: www.junglerot.net, Label contact: www.remissionrecords.de