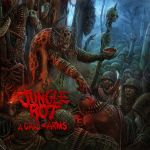 Very good compositions, which is notorious for this band. It’s not as though they’re duplicating previous releases. They’ve been coming up with some fresh riffs on the guitars. The vocals are about the same as they were on previous recordings. It fits well with the music. The songs are pretty tight in respect to how the riffs are catchy and brutal at the same time! I enjoyed this entire release. The leads are pretty well constructed in addition to the rhythms. I like how the tremolo picking on the guitars fit and made the songs even tighter. These guys have a lot to offer to the Death Metal community! I like how they were able to make the rhythm guitars flow with the voice. And the songs are very noteworthy. I liked everything about this release. The music, the vocals and the production quality. The only caveat was the duration of the album. It’s only about 33 minutes. I wouldn’t be surprised if their music shows up on Ultimate-Guitar.com. The riffs are that good! And the vocals fit well, they seem to have everything going on here. The music is what I admired the most. Just all aspects of it. As I said, the production quality was top notch, making the music identifiable and clear. I’m not a huge fan of the vocals however, that’s the reason for the “B” on this release. It’s just an acquired taste for them. But the music was mostly moderate tempos with double bass kicking furiously. The riffs are very fresh and noteworthy (as previously mentioned) and that’s what’s so admirable about this release. They’re not duplicating riffs in the past, they made a new onslaught of songwriting this time around. This is one of their more solid releases and let’s hope that they continue on this path of great making of their music! www.facebook.com/igotjunglerot, www.facebook.com/uniqueleaderrecords