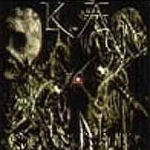 Ugh! This singer (Ashram) sounds a bit like Leif from DEW-SCENTED having severe problems on the toilet. Maybe it’s the clear but powerless production that supports my impression. Secondly, Ashram uses countless “shits” and “fucks” on the first track leaving a scent of trying to sound bad or angry without too much success, if you ask me. Song #1 sounds a lot like the early German Thrash movement. I’ve heard this kind of riffing a thousand times before I guess. The second song starts much slower and sounds more interesting most of the time (yeah, I’m a lazy doomhead who doesn’t like to get his arse up) until it gets faster in the end in a kind of cheesy way. Like BAD early German Thrash (sorry, I’m not so much into that style as I always preferred the American way of the genre). Track #3 is too modern for my taste which fits better with Ashram’s singing, though. But I really can’t stand this mid paced groovy “nu” Thrash style. In this case the change of pace improves the song (again at the end of the track) – first a fast old school Thrash rhythm, then even a blastbeat. Song structure? For what?!? The next song (why name the songs as I will never remember them in a week or so and I don’t think it’s important) is a little more natural. On the other hand, Ashram’s voice sound quite a bit distorted although the inlay card points out that he doesn’t use any vocal effects). That’s the problem I have with his style. Up next there are 4 demo tracks that sound more old school, frequently crossing the border to Death Metal. But do I need another band of that style? Only if they’re truly good! The overall feeling says: “love me or hate me”. I tend to the latter due to lack of structure and the vocals. Check out their pretty cool homepage. www.brutalka.com