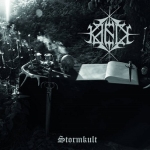 The Netherlands aren’t known for a major deliverance of Black Metal bands. Apart from the more known bands like CARACH ANGREN, SLECHTVALK and of course HERETIC and BESTIAL SUMMONING, we got lesser known ones like SAMMATH, KJELD and NOORDELINGEN. And let these three be responsibe for KÆCK. I’m not sure if this is a real band or a project at this stage, but it’s a very promising name to remember. What stands out immediately are the Dutch lyrics. Sure there are more bands doing lyrics in their own language, but with this the international reach has become significantly limited and is therefore a brave decision. The sound of KÆCK on this 6-track EP isn’t like many Black Metal releases today and immediately warps you twenty years back in time. It catches the rawness of the first acquaintances with EMPEROR, SETHERIAL, GORGOROTH, SATYRICON, GEHENNA, DODHEIMSGARD, DAWN a.o. Or a band like KATECHON, to not fully silt up in nostalgia. Next to the production the band (praise God for this) also knows to convince in atmosphere and sheer quality. The drums are pounding and fast, without todays hyperblasting madness, which helps the comparisons with these pioneers even more. The track ‘Wormvloed’ starts off pretty Death Metal because of the riffing, but soon blends in with the rest, breathing the Norwegian sound. The vocals sound tormented and hateful with occasional disturbing shreeks. The keyboards succeed in awaring us of their existence. Even more, they reach their goal adding to the atmosphere. Don’t expect and symphonic DIMMU BORGIR epicness but suiting effectiveness. Another cool thing about this release are the riffs. ’De Heerser Wederkeert’ for example, has some awesome melodies lifting the intensity of this track. To wrap it up and sum it up, this is mandatory stuff for simple yet powerful Black Metal which changed the game two decades ago. Unoriginal as peanutbutter but tasty and a pleasant surprise. Check this out and hopefully we’ll hear some equally good stuff from these guys in future. www.facebook.com/kaeckhorde, www.folter666.de