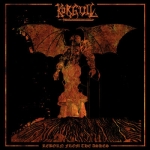 KÖRGULL THE EXTERMINATOR
Reborn From The Ashes
(Ván Records)
42:39min

New deal, new album, the same dose of madness. KÖRGULL THE EXTERMINATOR again managed to record an album which sounds like a bunch of good friends hanging together, liking the same kinds of Metal and finally gather to let others participate. And they really want you to perceive their point of view because nine releases including four LPs in seven years is a decent statement I think, considering the fact that all of them are pretty busy being successful (at least underground wise) with a few more projects. AKERBELTZ, GRAVEYRAD, INFEKTOR for example. Fortunately in between all that stuff they found the time to kick out “Reborn From The Ashes”, which basically is a coach tour through Heavy, Speed, Black and Thrash Metal with a nice Punkish stench. Typically KÖRGULL THE EXTERMINATOR as one might say. And yes it is. On one hand the tried and trusted recipe they use to strain your neck with, but on the other it is impressing with which consequence they give a fuck about expectations or something like that. As usual for an KÖRGULL THE EXTERMINATOR album, their main goal on “Reborn From The Ashes” is to set things straight as fast as possible. Go and fuck yourself with harmonies, complex song structures, long guitar solos or extra ordinary drumming. And don’t even ask for more philosophy then burning battlefields or the total human genocide. And like always, this LP too has its unique charm and catchy magic. And Lilith the absolute will to go to war with you. Very pleasant of her and the rest of that brood. I say, war is always something tricky but with KÖRGULL THE EXTERMINATOR you have a of commando of utterly fearless maniacs with you. So grit your teeth and get to it. “Reborn From The Ashes” will guide your way perfectly. www.facebook.com/korgulltheexterminatoraxethrash, www.van-records.de