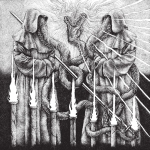 It was just this year that Spanish premier Death Metal band GRAVEYARD really blew me away with their furious album "The Sea Grave". Now they’re already back with new stuff, this time they joined forces for a split album with their country and even city mates KÖRGULL THE EXTERMINATOR. "La Gernandat De La Nit Profunda" is the title of this effort and it presents four songs by each band, who are long time friends and in the meantime even share members, since KÖRGULL’s guitar player Mark Wild also plays in GRAVEYARD now, while their bass player Bastard helps out on stage for KÖRGULL. GRAVEYARD open up their side with the great ‘Dream Of A Million Corpses’, a mean, mainly slower cruncher in the vein of ASPHYX, spiced with a middle part that would fit any GRAVE album extremely well. This one alone is worth getting the album. But of course there’s more of them here. ‘Foul Places Of Thirst And Eternal Death’ is a typical GRAVEYARD crusher in their typical, Swedish inspired style, which means fine stuff for Deathers all over the world. Furthermore, there are two cover tunes presented here: one is a well adopted "live in the studio" take of the classic PARADISE LOST tune ‘Eternal’, the other is their version of ‘Revenge Of The Dead’, originally by their friends of KÖRGULL THE EXTERMINATOR. This one is the fastest one of GRAVEYARD here, very punky and thrashy, yet it is fitting the band pretty well. The other side presents four songs by KÖRGULL THE EXTERMINATOR, who are around around even longer than GRAVEYARD, since 2004, to be precise. Well, what can we expect from a band who took their name from an absolute classic VOIVOD tune? Only the best, for sure. And those Spaniards prove my expectations right… Their songs are a fuckin bastard of Thrash Metal, old school Hardcore and a little Black Metal, sometimes refreshingly simple, and straight forward into your face any time. Their first song ‘Operation Terror’ is such a fine thrasher with those over-the-top vocals and the galloping rhythm, it’s nothing less than pure joy. But the following goodies ‘Black Pandemic’ and ‘Devoted To Death’ (a re-recorded older song) are very fine as well and follow the same beat. Finally also KÖRGULL did a cover tune, surprisingly they chose a GRAVEYARD tune… They gave ‘Walking Horrors Of The Dead’ from GRAVEYARDs first offering "One With The Dead" their special treatment and made it a KÖRGULL Thrasher. Very well done for sure! So, get your copy soon and yell those words Doomentia Records finished their info with: Hail Spain and fuck the trends! www.graveyardofdoom.com, www.facebook.com/korgulltheexterminatoraxethrash, www.doomentia.com