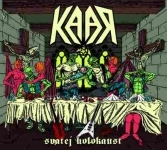 In the early 1990s, the Czech extreme Metal underground presented a bunch of bands that got their first chance to escape from their practise rooms and play shows that were not a thorn in the flesh of the authorities. The so called real socialism was just swept away and Western democracy took over in Czechoslovakia and later manifested in the Czech Republic. I remember two samplers I bought in a tiny record shop when I visited friends in Czechia some years later. These compilations featured Thrash, Death and Black Metal bands that were really interesting and despite the musical difficulties, they were united by the language. All these songs were presented in the Czech language, something that got lost quite a bit on the way. But of course there are still bands that dare to sing in their native language. KAAR from Prague is one of them. And the language is just another fine ingredient that makes the band’s third album “Svatej Holokaust” a real feast for all you Thrashers out there. The style of KAAR is fresh and infectious. Somehow I feel reminded of that new wave of Thrash Metal that came up about ten years ago with all these fresh young Thrashers, some of them with a punkish power similar to KAAR. You know, these shout-along choirs and the rousing, nearly rabid vigour. But KAAR also have a certain, yet not dominant influence of Black Thrash acts in their sound, more in concern of spirit than in concern of music. All this freshness and the sheer power make songs like ‘Cirkus, Smích A Sebevra¸da’, ‘Zrozen Zemrít’ or ‘Sklenenej Hrob’ a real joy. “Svatej Holokaust” is an album that is highly recommended for anyone into Thrash Metal with real spirit and barnstorming energy. If you still need some info, visit www.facebook.com/kaarthrash or www.supug.cz