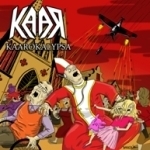 An optimal length for a fast and furious Thrash Metal album is less than a half hour, right? Well, don’t know about that, but in case it’s something like SLAYER’s infamous album "Reign In Blood", then we could be on the same page about some certain lengths of a Thrash Metal record for sure. KAAR from the Czech Republic are keen on playing Thrash of the fast and furious kind but then again, they are not Czech Republic’s answer to SLAYER in severity or quality of Thrash Metal’s maturity much either. However, without having any disrespect against KAAR, it must be said there’s still something very fascinating and tempting in KAAR’s way to thrash their hearts out though. They do remind me of the days when young kids put together their first Speed and Thrash Metal groups, wanting to sweat and bang their heads a little bit in the name of fun, and in the name of Thrash Metal of course because there were already were some cool albums out there like "Kill ‘Em All", "Show No Mercy", "Bonded By Blood", "Sentence Of Death", "Endless Pain","Spreading The Disease" and so on, that pretty much were some of those best things that you had heard in your life thus far. These four Czechs in KAAR have pretty much stick to the old guns, making Thrash that sounds raw, unpolished and going straight to the point basically. Hearing all this sung in their own native language, definitely makes it all a bit special for listeners to digest but in a way KAAR still win most of our sympathies to their side (like mine) even if they do lack this and that here and there but then again make it up with all that enthusiasm and energies they have put into this release. These Czech Thrashers’ deliver their goods well enough on their 2nd album "Kaarokalypsa" that I am sure that many old school spirited Thrashers will find lotsa satisfaction from their type of simple and energetic 80s tinged Thrash. So by all means give a chance to surprise yourself by checking KAAR out. Hey, doesn’t the beginning of a song called ‘Messerschmitt" sound somehow pretty familiar, does it? More about KAAR at www.bandzone.cz/kaar