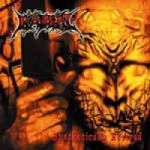 According to their info sheet KABBAL has been influenced (among others) by MORBID ANGEL, SUFFOCATION and the first SLAYER records the most. Well, nothing wrong in that, especially considering that these guys are hailing from France, a country which still has a long way to go in terms of brutal Metal. But what you get here is neither the brutality of SUFFOCATION nor the intensity of SLAYER. The nine tracks are kinda like in between – definitely more brutal (speak: Death Metal rooted) than SLAYER has ever been, but never to the extend that they come up with rather unnatural deep grunted vocals or over the top grinding highspeed madness. This is basically a lot more old school sounding, with a brutal, yet understandable and rather cool Death Metal vocalist (who partly delivers a doubled vocal style in the DEICIDE vein) and musically mostly performed in the midpaced way and with faster parts just thrown in here and there as opposed to blasting all the way through. It’s actually those faster parts that tend to remind me on old SLAYER a lot (in terms of the riffing), while the overall KABBAL style somehow has a certain MORBID ANGEL feel to it. The technically brilliant, but still straight forward played songs live off great unique guitar pieces – partly melodic, partly rather twisted, but always in order to support the individual atmosphere in the best possible way. The more I listen to “Synthetically Rivived” the more it grows on me and the more I start to appreciate its obvious qualities. So, this is definitetely a very cool debut which is highly recommended to all Death Metal lunatics that are sick and tired of the new wave of Goregrind Death that drastically changed the scene around lately. Label contact: www.diamond-prod.com