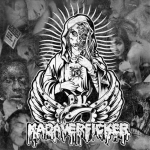 Even though KADAVERFICKER are around for twenty years (with some time on hiatus), they are really new to our pages. But their discography is quite overfilled with dozens of split releases, yet only one album, “Exploitation Nekronation" from 2012. Somehow this, in combination with the name and the album title, screams Grindcore! Well, it screams really loud. And you’re damn fuckin’ right. This is Grindcore, the kind of Grind that neglects any kind of good taste to the maximum. But it would definitely be wrong to label KADAVERFICKER as Porn Grind. They are a real band with four constant members, they play live and the music was recorded in a real studio, not on a computer. And those samples from Porn (and Splatter) movies are there, but they aren’t more musical than the music itself. Instead, this sick and always masked four piece is primary inspired by those old fashioned Grind and Stenchcore bands of the first wave of Grind at the end of the 1980s and the beginning of the 1990s. Names like DISHARMONIC ORCHESTRA, BLOOD or PUNGENT STENCH come to mind, early CARCASS and NAPALM DEATH as well. So it’s the who is who of the genre that’s the basis of this album. Of course “Nekrokore Is Love” doesn’t keep up with those early great pioneering deeds, yet the album is a good fun for those who like those bands mentioned before. KADAVERFICKER are rough, rude and primitive, in a positive meaning, and nearly all their songs are under two minutes in length, it’s just the album intro and the final hidden track ‘Nekrofickerland’ that pass this magic mark of the genre. By the way, talking about the hidden track – before this one, there are no less than 47 identical “songs“ (the needle of the record player reaching the end of the groove) of four seconds in length, pushing the album over the mark of 30 minutes running time. Pretty short, but enough for an album like this one. So, if you’re into old fashioned Grindcore with a sick sense of humor, you’re welcome to dig songs like ‘Nekrobama: Death, We Can’, ‘Je Suis Nekro’, ‘Nekropower In The Acid Shower’ or ‘Bis Hierher Und Dicht Weiter’ (only German speaking people might get the pun here…). They are as good entertainment as all the songs on “Nekrokore Is Love”, except for the not that successful BAD RELIGION cover ‘Pessimistic Lines’. Check the band out at kadaverficker.bandcamp.com or www.facebook.com/kadaverficker and visit the very dedicated label, of course, at www.facebook.com/godeaterrec