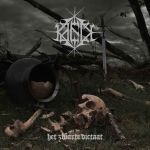 KAECK emerged from the world below in 2014 and released their quite good debut album “Stormkult” in 2015 on the German label Folter Records. The band is still on Folter Records, which is also behind the new release “Het Zwarte Dictaat”. Yet a frenzy Black Metal attack on our poor souls, with lyrics written and spewed forth in Dutch. The debut album is a frontal attack of cold and atmospheric Black Metal, classic and grim with interlaced synth work that adds a great deal of spice to the violent attack. I find the album good and hard hitting, and it is very lasting to this day! Since then, the keyboard player has, apparently, left the band. Kruitwagen, who handles the guitars quite capable, has taken over the keys as well, and he does it very well, the dark and evil wicked atmosphere has been upkept. The vocals on the new album are more frantic and all over the place, compared to the first album. Quite diverse in the range, from deep growls to high pitched insane screams, to possessed laughter, and everything in between of sick craziness! The music has become heavier together with a heavier and darker production, more raw and chaotic at times, there are some really insane pace shifts that work really well. Some heavy, almost doomy parts with good underlying synth, and then War Metal like blasts from hell, all weaved seamlessly into each other, good songwriting skills! The band has matured somewhat in the last 4-5 years and has gotten a quite good grip on their own niche within violent Black Metal. The second half of 2021 has given us some fine Black Metal releases, and especially the last month we have had, have seen a lot of contenders for the top ten of 2021, though in my opinion they have been released too late, to come into consideration, as we haven’t had the time to give them enough spins, to eventually see if we grow tired of them too soon. Though to hell with that right now, as “Het Swarte Dictaat” is a damn fine album. Hell of a lot of sheer power, intensity, atmosphere, aggression, thoughtfulness, a quite complete and dark album the Dutch trio has delivered, it has been worth the wait! Enter spellcraft and heathendom: www.facebook.com/kaeckhorde, www.facebook.com/folterrecordsgermany