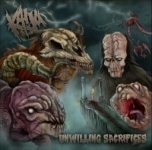 KAIJU means strange beast in Japanese and this perfectly describes the pretty demented music this US combo presents on "Unwilling Sacrifices". After a demo called "The Gods Are Angry" from 2009 they released their debut "Total Monster Armageddon" which I didn’t check, only the tracks which you can find on their Myspace page and are mostly equal to this EP (I guess). "Unwilling Sacrifices" is released on Slaney Records and contains 6 tracks including one intro. The package used here contains an extra track called ‘Nun Eater’, but I couldn’t find this on the actual release. The production is heavy and done by Elektrokutioner of DECREPITAPH. The artwork is excellent, done by vocalist Nev. Musicwise it’s a mix of everything and not just straight Death, Thrash or Doom Metal. Bands that popped up while trying to put this to paper were HADEZ and MACABRE (mainly because of the vocals), KATAKLYSM (demo), MASS PSYCHOSIS, INCUBATOR, MASSACRE, NECHOCHWEN and CANDLEMASS. A few others, but this list speaks for itself already and mainly some parts here and there resembled these mentioned bands. On ‘We Still See The Black’ it sounds like something went wrong in the mixing process. Also the use of sampling is present. All these ingredients produce a weird atmopshere and KAIJU succeeded in creating something out of the ordinary and manage to keep a certain atmosphere of morbidity but without real horror. So luckily this is better digestible than HUNAB KU, but what isn’t? Talking about the music, it’s mainly slow with some speed ups and overally comes close to MASSACRE and slower MASS PSYCHOSIS in the heavy parts. This is cool stuff and a track like ‘Oath Of The Pentagram’ will do good on any occasion. So check this out first and decide for yourself. For more info and soundclips, go to www.slaneyrecords.com/kaiju.html or www.myspace.com/kaijumetal. Like this more with every spin.