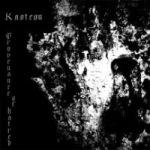 As Metal is illegal in Lebanon it’s risky to send such music via snail mail. So I was approached by the band to download their demo. Actually, the production is pretty good and the band plays with lots of passion. This doesn’t mean they’re bad musicians – not at all! All of them play at a pretty high level and I have to highlight their singer because of his impressive work: he whispers, screams and grunts like a madman! The demo was recorded in one take at a home studio. Respect! The opening melody of ‘Decrepitude’ reminds me of a well known tune but I can’t remember which. Drives me pretty crazy. Still, the song breathes an atmosphere of its own. ‘Provenance Of Hatred’ sounds a little bit like early BLACK SABBATH on Black Metal, especially because of the guitar sound. In a way, this is "grim" Black Metal and I wouldn’t have thought it’s from a middle east country. Doesn’t sound Norwegian, either. Pretty much universal good Black Metal. The last song ‘Wrenched’ sounds a little strange to me as some parts don’t really fit into my drawer of Black Metal but who cares? Although Unsung Heroes released the demo on CD-R (with no rights over it), the band is looking for further offers from respected labels so the demo would be released in any other format (pro tape, vinyl, CD, etc.). The band’s website is still under construction so check it every now and then. Finally, in case you have ideas or the means to support KAOTEON, contact the band: www.kaoteon.com, unsungheroesrecords.cjb.net, www.metaleast.com/bands/kaoteon/01-decrepitude.mp3, www.metaleast.com/bands/kaoteon/02-provenance_of_hatred.mp3, www.metaleast.com/bands/kaoteon/03-wrenched.mp3