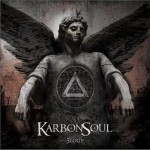 There are two problems regarding this EP by KARBONSOUL from Portugal. The first and most severe one is the music. Gothic or Dark Metal with female vocals without any remarkable trademarks. There are a few atmospheric and musically noteworthy moments, but after listening a dozen times to "3Logy" only the female vocals lingered in my memory. Comparing KARBONSOUL to a band like maybe LACUNA COIL clearly shows the huge distance between a newcomer and a more experienced band. Which leads directly to the second problem. This EP is published not only in a normal but also as a digipak CD version with art booklet (whatever this means in detail) and even bonus track (which is obviously missing on the promo I got). Up to a certain point I can understand the musicians, they must be as pleased as Punch. But the music simply does not fit to this form. Especially if you have in mind "3Logy" is, after a 4-way split-release in 2010, just the second output. The three tracks are on the level of a demo and a publishment via streaming or traditionally on tape would be more fitting. Even if it sounds hard – I can not anyone recommend spending money on this EP. For all additional information check out: www.facebook.com/karbonsoulband, www.facebook.com/fatsound.productions