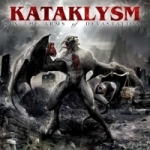 KATAKLYSM
In The Arms Of Devastation
(Nuclear Blast Records)
41:07min

Northern hyperblast Death masters have recharged their batteries to unleash a new opus of grinding devastation. It’s been two years since their widely popular “Serenity In Fire” and honestly I must admit that I was one of the detractors thinking that this band could not get any better than what they did on the last album. But certainly I was wrong. They keep on surprising the scene and that is certainly a must. This time around they have taken a diffent approach, yes, you might have heard that they have slowed down a bit but that shouldn’t be a major flaw as long as they keep the spark even when they are not playing at the hyper speed they are known for. “In The Arms…” is a crunchier, catchier riff-feast and a very enjoyable album by all means. I specially like the thrashier guitars and that amazing drum sound they achieved this time around which is far better and less “plastic” sounding than the one on “Serenity…”. Little bit more of melody and dynamics can be added to the melting pot and then you’ll get somewhat closer to what their new album is about. I personally enjoyed songs like ‘Crippled & Broken’, ‘To Reign Again’, ‘Temptations Nest’ and the one I think is my fave ‘Open Scars’. I kind of feel a little bit of influence of the latest KREATOR albums production-wise as well. Interesting fact is that the song ‘The Road To Devastation’ features guest appearances by Tim Roth and Rob Doherty of Into Eternity (another prominent band of the Canadian scene). Visit thier webcave at: www.kataklysm.net.