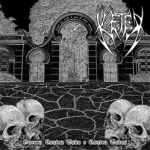 The city of Salvador in Brazil makes most extreme Metalheads think of HEADHUNTER D.C. in the first place. But there’s more Metal from that city, of course. Just for example, the current guitar player of the city’s flagship, George Lessa, has another band as well. This band is called KETER and it’s already running for ten years now. But KETER is either not much more than a hobby or not really haunted by good luck, since it took the band until now to release their first full length album “Guerra Contra Tudo E Contra Todos” (“War Against Everything And All” in English). Before this one, there were only two demos in 2005, resp. 2008 and a two-track single in 2010, both songs of which are featured here as well. And what does this first album has to offer? Gorgeously unspectacular Death Thrash Metal, that doesn’t add anything new to the genre itself, but is a joy to listen to. After the intro ‘Requiem’, the first song ‘Bellum Omnia Omnes’ (the Latin translation of the album title) already shows where the rubber meets the road. No prisoners, full speed ahead and with an ultra aggressive riffing, KETER thrash and smash, it’s a pure pleasure. Always remember: why play slowly? We don’t have time for that! Of course KETER are not always on full throttle, there are some slower parts as well and the melodic moments aren’t left out as well… So, there’s enough food for all Thrashers out there on “Guerra Contra Tudo E Contra Todos”. Check the rather melodic ‘I Don’t Believe’ from the single or the pretty complex ‘Insanidade’, sung in Portugese like most of the songs here. Visit: www.facebook.com/keterband for some good, friendly violent fun.