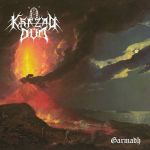 KHAZAD DÛM is not only the Dwarfish name of the mines of Moria in Tolkien’s epic “The Lord Of The Rings”, but also the moniker of a pretty new band from the Brazilian town of Uberlândia. Founded in 2014, the three-piece released two digital demos to date and recently unleashed their first physical output. It’s an EP entitled “Garmadh”, maybe taken from Tolkien’s works again and meant to be the short form of the Orc camp Garmadh-maudhûl in Mirkwood. Despite all the references to the fantastic world of Middle-Earth (hence some song titles as well), the music of KHAZAD DÛM is far from being epic. Instead, we have old fashioned Black Metal on “Garmadh”, with hints of old European Thrash Metal. But I also sense the legacy of Brazil in some moments, those mid 1980s acts like SEPULTURA and the likes. This mix works pretty well most of the time, asides from being a little dated, but I never cared if music sounds dated or not. Yet, it only works most of the time, which means there are some flaws as well. Sometimes there are cheapest keyboard sounds that get on my nerves, and this is not even the worst problem I have with KHAZAD DÛM here. It’s the absolutely failing attempts to create an epic atmosphere with choirs that sound damn flat, ruining otherwise fine ideas like in the opener ‘Rise Of The Immortals’ or the finishing ‘Proud & Feeble Men’. Less could have been more here, so KHAZAD DÛM might reduce their ambitions for a more pronounced and straight forward sound. The final verdict for “Garmadh” can only be: pretty mediocre. But apart from the six tracks of the digital EP, the CD version offers two bonus tracks, one from each demo recording. And these two songs are in my eyes the highlights of the disc. ‘Dark Skies Of Black Times’ is a clash of early SODOM and middle-aged DARKTHRONE, a fine musical roughneck that completely is my speed. And ‘Rage In The Night’ sounds even more old school, bumpy, loutish, yet cool. Maybe I should look for a chance to listen to these two demos… Those of you interested in South American extreme Metal are advised to check out KHAZAD DÛM anyway. Do so at: www.facebook.com/khazad-dûm-899304760127705, or visit their label: www.wrathoftyrants.com