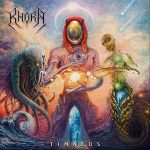 What to do when some people aren’t feeling we are having enough DØDHEIMSGARD in the world? Create a band that is based upon the same principles and magic songwriting and atmopsheric rises and drops. That is exactly what KHÔRA has done, a band that originated in Germany, though is a tad spread out over Europe nowadays. We are dealing with atmospheric Black Metal with a post apocalyptic and magical feel to it, if you think of a mellow mic of DHG and mid-era ARCTURUS, you are not totally off the style KHÔRA is delivering. The atmosphere is ambient and quite often uplifting, which a tad contrary when speaking of Black Meal fundamentals, it is magical and possesses quite some energy and intensity. The songs are well crafted, with catchy and hooking main riffs and a good main theme throughout most songs, so nobody gets lost, no matter how much is going on during a song. The vocals are quite good, we are getting an idea of Simen Hestnæs, Garm, Vicotnik, Aldrahn and Shagrath, perhaps not so original, though quite well delivered and even more fitting for this musical universe. “Timaeus” takes us on a great journey throughout mysticism and philosophical renderings, the band has created a great and drawing universe, it is a quite good album they have crafted, which I am sure will stand the test of time. Enter the apocalypticism: www.facebook.com/khora.official, www.soulsellerrecords.com