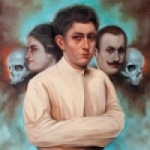 A ‘super-group’ made of Finnish heavy Hardcore bands? Sounds like a total absurdity on the paper, right folks? KILL THE CURSE, however, features both ex – band members and current band members from such modern sounding Hardcore heavyweights as BOLT, COLD INSIDE, SECURITY THREAT, ENDSTAND and ON A SOLID ROCK – and I was expecting no more less from KILL THE CURSE’s debut album but a hate-filled, powerful and head-stomping Hardcore that has also absorbed many elements from Metal music into it, especially from the Thrash Metal genre. Calling them 100% as a full-on Hardcore act music wise, would be misleading because their songs are so heavily dominated by heavy Thrash riffs – plus, the gruff vocal lines of Kalle Pennanen (ex – SECURITY THREAT) that kind of remind me partly of Kam Lee (during his MASSACRE days) and Randy Blythe (LAMB OF GOD), all these sort of, ‘non-Hardcore’ musical ingredients tend to underline the band’s own mission to differ from the masses just as a plain Hardcore – oozing band. With all-giving yet very powerful attitude of a Hardcore act, added with a strong metallic sounding approach to their stuff, KILL THE CURSE manage to blow sky-high a couple of banks on the next block on this 8-track debut effort of theirs titled "Of Conformity And Death" (metaphorically speaking at least) – so much sheer intensity, rage and aggression is wrapped around this relatively promising Finnish ‘Thrashcore’ outfit. By all means, check more about them at: www.killthecurse.bandcamp.com, www.fullhouserecords.com