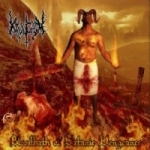 American Black Metal with stick-that-pig-to-death type of screeching, abnormal vocals that one associates with extremely brutal, gore-soaked Death Metal most often – added with sort of cliché-filled satanic and sadistic lyrical approach, that makes you think how on earth all Christian people have actually managed to survive in this utterly evil world for centuries? In a good faith to believe God is with them ’til the end of times? Now go and suck his small, decaying dick – you weak, worthless pussies! KILLGASM, aka Corpse-bukkake on blood vomiting and a 4-blade upside down turned crucifix, Nekrotiis on a 6-blade upside down turned crucifix and Emperor Kuntslaughter pounding the drums of doom with the dick of Satan, sound like they want to put the final end to the Christian world for good. And obviously they do their share more than well enough on that purpose according all that venomous energy and malicious intent to spit on the face of God that the songs on their debut full length reek so strongly of. For what this is, it’s a good American Black Metal, played with lots of conviction and determination only not to look evil but most importantly also to sound truly fuckin’ evil and utterly unholy, which is always sort of winner’s combination. At times, KILLGASM manage to reach that familiar state of distorted but still a controlled chaos music-wise that harkens back to the times of IMPALED NAZARENE’s now at least semi-legendary "Tol Cormpt Norz Norz Norz…" debut record, minus 6.66 rpm in speed. However, it’s the extremely rockin’ THE MISFITS cover song ‘Last Caress’ that really connects KILLGASM somehow closer to IMPNAZ’s early times, ending the song and record with the repeated words of ‘fuck!’ F**k… KILLGASM fuckin’ rips! www.killgasm.com, www.myspace.com/killgasm