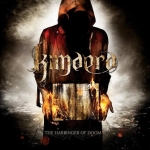 Countries of the Middle East, are not that well known globally for their Metal bands even if as it’s been said before, liking Heavy Metal in general is a global thing, uniting people – and overall the world more than any other thing in this somewhat sad world of crises of all kinds. Lebanon is a prime example of one of those Middle East countries where some Metal also exists but nobody necessarily is all that aware of some of the band offerings in Lebanon – and Metal bands in particular. One of the few bands hailing from Lebanon, are KIMAERA who play sort of a combination of atmospheric Doom and Death Metal, with a fair twist of Gothic Metal sticking out from their stuff. KIMAERA were formed in 2000, and they have released 3 studio albums after that. "The Harbinger Of Doom" is their 3rd studio opus in order, offering a somewhat entertaining yet even great listen for people. First off, it could be stated that the British Doom / Death Metal veterans MY DYING BRIDE have played a great role in KIMAERA, the Brits in question undoubtedly being a strong influence on KIMAERA when the band was starting to take its very first baby steps way back in 2000. Mean and gruff death growls, fragile female singing, violins, big and dark, emotionally moving deep atmospheres, etc., the concept is probably even too familiar and yet even safe for most of us, right? MY DYING BRIDE’s strong influence has clearly been a stepping stone for these Lebanese doomy Deathsters – and there’s of course absolutely nothing wrong with that. In fact, KIMAERA have done a nice job on "The Harbinger Of Doom", utilizing beautifully yet smartly some of those heroic and engaging ingredients within their own sound that once made MY DYING BRIDE such a highly likable act during the early period of their career. KIMAERA have managed to get the right strings in their hands, and they have also been successful at pulling them the right way on "The Harbinger Of Doom". KIMAERA is perhaps the most convincing tribute act for MY DYING BRIDE, and that was not meant as any offense towards them at all but merely like a true compliment instead. A song like ‘Blood Of Saints’ off the record is simply a work of genius minds; just an amazingly catchy and memorable song from start to finish. If the band’s other 2 albums are any as good as "The Harbinger Of Doom", I guess I have no other choice but try to hunt both of them down for myself as well. KIMAERA should deservedly get more love from each of us, no doubts. More about KIMAERA can be found at: www.kimaera.info, label: www.stygiancrypt.com